Popularly known in the media and social media world as Lady E, Ejiro Umukoro is a Media Executive with Mega FM 89.1 Warri, Delta State, broadcaster, investigative journalist, social entrepreneur, writer, mentor, life improvement coach, and social activist.
She is a winner of so many journalistic awards, including receiving an award from the prestigious Wole Soyinka Centre for Investigative Journalism Report Women Leadership Programme. She is also recognised internationally for her work, especially in the area of the children’s right and girl child protection.
In her latest work, a storytelling fiction, Ejiro brings to the fore of our consciousness issues concerning the mental state of man, especially during periods of crises as experienced in the wake and impact of the novel coronavirus pandemic when the world witnessed violent spikes of abuse and violence against women and the girl child in her book, titled “DISTORTION”.
Describing the book, Ejiro says it is the first Mental Health Crime book to be written by someone in her field in multiple roles as a broadcaster, journalist, and top Executive Media Officer in Nigeria.
The work which is centred on the a young man, called Abu, is a work of fiction which describes the typical gender-based abuses, forbidden topics like Osu, pejoratives and discriminations, as seen at the height of Covid-19 across the world as gender based issues became serious in Nigeria and globally. In this interview she says, “During Covid-19, a lot of gender based violence happened, and a lot of children were abused. Because they were trapped under the lockdown, they could not escape due to logistical reasons and protocols regarding the ravaging virus during, and long before the COVID-19 pandemic.” This she says inspired her to write the story of “DISTORTION” http://lightraymedia.org/2020/10/07/distortion/
According to Ejiro, her experiences covering social issues and ills as a broadcaster, journalist, and media trainer is what she harnessed to amplify and bring it to the awareness of people through storytelling in book form, which according to her “is one of the ways to fight, and bring social injustice to the subconscious and conscious minds of people.”
She explains that the goal of DISTORTION is to expose some of the atrocities that happened during this period, and while some of them do happen, as she has over the years as an investigative journalist discovered, some of the reasons that perpetuates gender based violence such as rape, child abuse, dysfunctional mind-sets and homes, destructive bolster homes and illegal orphanages, lack of proper remand homes and safe shelters for victims, she used her strong voice to call out Delta State Government alongside other CSOs and NGO to have the VAPP Act (Violence Against Persons Act) passed at the state assembly, which had hitherto dilly-dallied in passing the VAPP Bill. 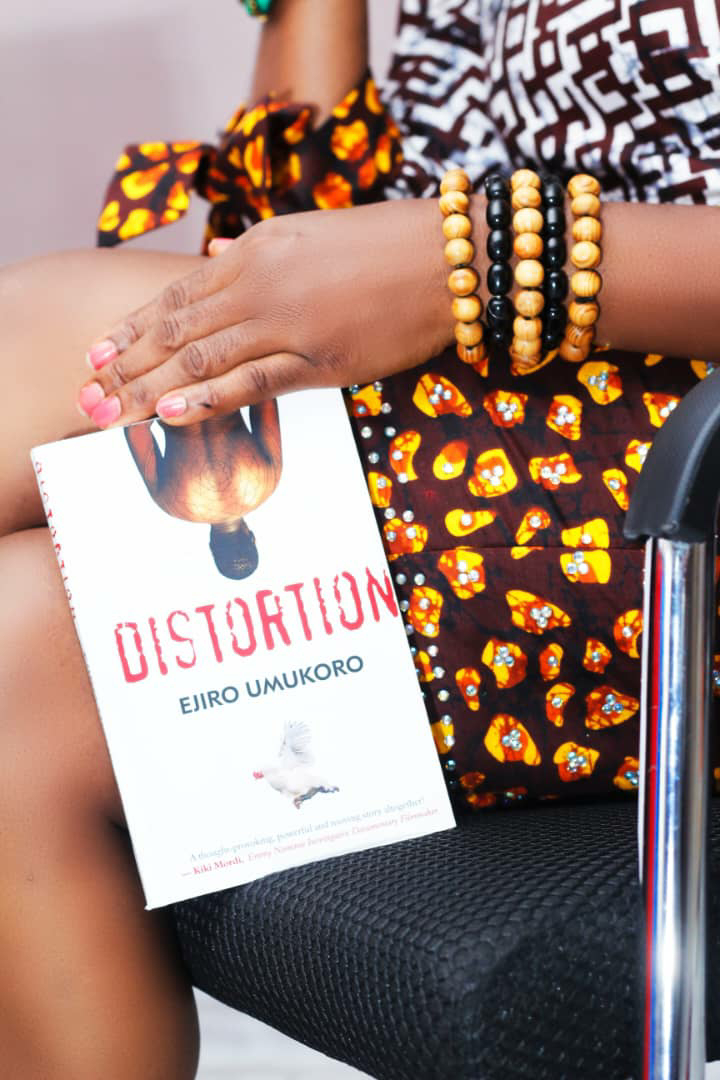 Ejiro pointed out that her investigation showed that behind every crime, there is a mental story, a personality story, a societal story, a political story, an economic story as well as cultural and morality story of a people. She explains that when things are the way they are in an environment wherein every form of ills continues to be perpetuated, it is because everybody within that space keeps silent and condones it by not raising enough voice against it or ensuring justice takes its full course. Her goal with DISTORTION she states is to bring out the voices of victims, the people who commit the crimes and enablers of such human rights crime, by not justifying the crime, but exposing why they continue to happen and how solutions to these ‘whys’ is at the root of a multi-solutions-commitment in implementing the VAPP Act in an intentional manner.
“Prevention is better than infliction”, she admonishes.
The book, DISTORTION, http://lightraymedia.org/2020/10/07/distortion/ is centred on a particular young man, Abu, who lives in a village in the Eastern part of Nigeria, where he is rejected by many people, especially women, who refused to date him or marry him because they feel he has a curse in his family regarding mental health issue.
However, the book reveals that there are more to the problem of Abu, than mental health, as Ejiro tells the story. She says, “When you don’t know who you are, the chances of committing crime will be very high, and the need for conscious self-awareness is something that the society need to look at more.”
Distortion she explains “Is targeted at all single male (young and adult) and the family unit as it exposes most of the daily issues we over look in our day to day activities. The book exposes the vulnerable indices and pointers many of us are not aware of.” Ejiro emphasises that many persons do not know they are vulnerable to, act, or even take violent actions, resulting from being exploited or exploiting others. These vulnerabilities shown in the book, triggers in people how they should begin to question how to cope with adversities when they find themselves in such a situation.
Lady E, a very positive person, points out that the book will be an earthquake, as many who had read the script, the likes of Kiki Mordi, Dayo Olupohunda, Lekan Otufodunrin, and so many others who have read the book wrote high praises for the book. Many agreeing that the story of Abu is how the society ruin the lives of many, as you can feel his loneliness, pain, and rejection he is going through, confusion, anger and depression. She says “As long as you feel the pain of Abu in this book, you will definitely question yourself,” as she felt it during the process of writing this work of fiction based on real stories.
Distortion a must ready by everyone, had led Ejiro to develop vulnerability pointers and indexes, a question and answer form that can be filled online. She says she’s been asking herself to question why she does most of the things she does, her truest motivation – something she says is at the core of why people sometimes act the way they do. “Sometimes we exposes ourselves, either as being perpetrators or silent enablers. We need to be conscious of this deep WHY.”
There will a series launches for DISTORTION, starting with an introductory launching of the book in October 13, 2020, which coincides with her birthday to be followed by a series of virtual launching and live events depending on COVID-19 protocol in place.
She however called for every individual to regularly check on how they feel, as everyone goes through mental distortion of some sort, sometimes resulting from the social environment we may find ourselves. Often this pressures, she explains, can result from lack of electricity, bad roads, poor economic system, poor implementation of economic policies, poverty, rejection, feelings of low self-esteem, or the reality that when one goes out to do business, one doesn’t seem to thrive when compared to efforts made, This in turn can lead to mental stress at some level or degree. From her investigations, Lady E says “There is no shame talking about mental health. When we start seeing the sign of mental distortions that is when we must start seeking for help, as mental distortion is a case of unhealthy mental pressure just like someone who suffers from high blood pressure realises it before it leads to stroke.
“Prevention is better than Infliction” is Ejiro Umukoro’s mantra in calling attention to mental health issues.
By Emmanuel Enebeli
Follow on Instagram
Follow on twitter
Follow and like Facebook Page
Subscribe Women Connect Nigeria YouTube
bookbook launchwomen in business
74 Likes
6 mins read
606 Views

Funmi Ilori, Founder of I Read Mobile Library Reveals the secret behind her innovation in the Educational Sector